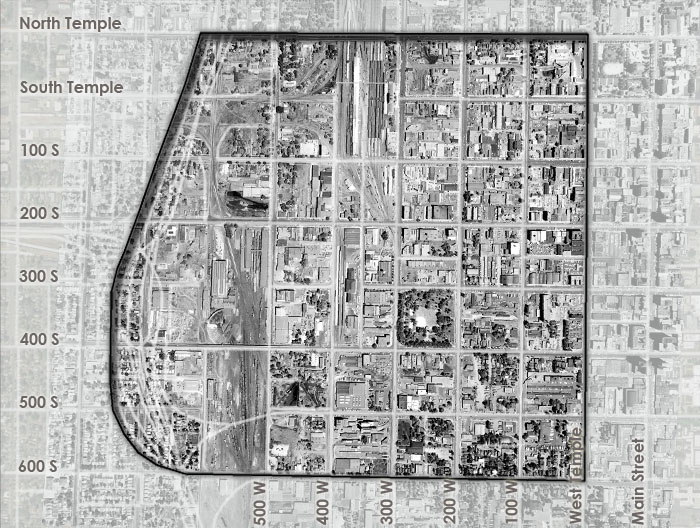 This post clarifies the traditional boundaries of Salt Lake City’s Pioneer Park nieghborhood or the original west side. It also defines terms used throughout the series when discussing geographic locations.

When we discuss Salt Lake City’s original west side we refer to a specific geographic area. The boundaries are as follows: North Temple Street marks the northern border, and 600 South is the south boundary. West Temple is the east boundary, and the I-15 freeway and railroad corridor (between 500 and 800 West) is the west boundary. See the two adjacent expanding aerial photographs, the first dating to 1958 and the second taken in 2015, to visualize the borders. Sometimes we will include subjects and stories integral to the neighborhood’s story that extend beyond these boundaries. These posts demonstrate the fluidity of culture, identity, and human interaction in the Salt Lake City and Salt Laked Valley. The borders, and the stories told within them, are not hard lines but permeable making the west side connected and influential to Utah’s political, cultural, and economic identities.

An Explanation for the use of the “west side”: In the nineteenth and early twentieth centuries, Salt Lake City’s “west side” meant something entirely different than it does today. Today and for the last century, the term “west side” describes areas west beyond the Jordan River, including Glendale, Rose Park, Poplar Grove, and West Pointe.  Up until World War I (ending in 1919), the “west side” encompassed the area from West Temple to the rail-yards. Before 1919, industrial lots, farmland, a scattered agricultural business, and residential developments occupied the lands west of the rail-yards. For this project’s purposes, we will use “Pioneer Park neighborhood” and the historical “west side” title interchangeably as we examine the history of the Salt Lake City’s diverse old western section.

Names, Names, and More Names: Over the years, the Pioneer Park neighborhood has had many informal and formal titles. Different names are associated with the various peoples living, speaking, and holding power in the area at any given time. People have referred to the area as “poor town,” “Little Italy,” “Greek Town,” “Little Syria,” “Japan Town” or “Little Tokyo.” Other names include “the old west side,” “the Warehouse District,” “the Depot District,” “the Hardware District,” “the Station Center,” and “the Rio Grande District.”  As you can see, the neighborhood as meant many things to different people over the years, and you will learn about these identities in this blog series. Many of these named geographical and cultural locations were bordered by, replaced or overlapped by one another.

Pacific Island Communities (an exception to the above boundries): Salt Lake’s west side also included the north section of Salt Lake City near the Wasatch Hot Springs. During the 1870s and early 80s, Maoris from New Zealand, Tahitians, and Hawaiians gathered in this then poverty-stricken area. During the late nineteenth and early twentieth century, the northwest side also became the location of several industries that included sand and gravel excavation. Railroad companies also chose the northwest side as a transportation hub. For example, the Oregon Short Line’s yard and roundhouse (part of the Union Pacific system) along with other rail yards were built in the area of 700 to 1200 North and 500 to 70 West. Ostensibly this area is part of Salt Lake City’s west side.

After the LDS Church opened a temple in Hawaii in 1915, church leaders encouraged members of the community to return to their Pacific homelands. A majority of the Pacific Islanders did choose to return to the place of their nativity.

By World War II, the LDS Church had grown substantially in the Pacific Islands. After the war ended thousands of Hawaiians, Tahitians, Samoans, Tongans, and other Pacific Islanders left their homes to settle mainly along Utah’s Wasatch Front. More specifically, a majority found homes in the Utah’s “new” west side communities, located west of the Jordan River across the Salt Lake Valley.

A Note on Street Names and Renumbering: In 1973, the streets north and west of Temple Square (west of West Temple Street and north of North Temple Street) were renumbered to align with the existing lot or building addresses. For example, 100 or First West became 200 West (which made West Temple also 100 West), and Second West became 300 West. This has created no end to confusion, especially when researchers are reading documents produced before 1973. In Salt Lake West Side Stories, all street names use the post-1973 names (or numbering) system to allow readers to connect with the current physical space.

As you can see, Salt Lake’s west side has a diverse and rich history. As you read each post and interact with the images and other materials, you will have the opportunity to interact with the previously mentioned themes and the boundaries described above.  Don’t forget to look again at the two aerial photographs, likely, you’ll be coming back to them, as you read subsequent blogs.

Related Activity: Take a lap around the Pioneer Park neighborhood boundaries and consider the space’s historical background. Touring the neighborhood might not be easy, but it is worth it to get a sense of space as you continue reading from this serial blog.

Do you have a question or comment? Write us at: askahistorian@utah.gov