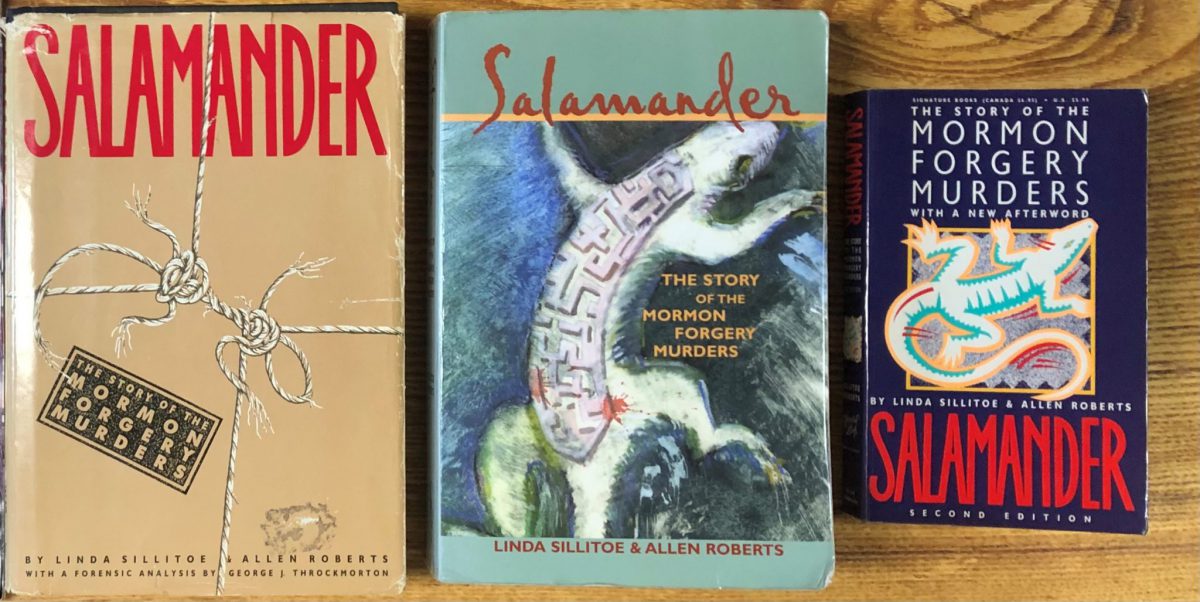 Date: March 22, 2021 (Season 2, Episode 16; 62:00 minutes). Click here for the BuzzSprout version of this Speak Your Piece episode. The above photograph is of the three different cover designs for the Pulitzer Prize-nominated best-seller Salamander: The Story of the Mormon Forgery Murders. Courtesy of Allen Roberts.

The Netflix documentary Murder Among the Mormons (released March 3, 2021, IMDb) has created much national interest, or should I say renewed national interest, in the story of murderer and master counterfeiter Mark W. Hofmann (professionally active 1979 to 1986). In this episode of Speak Your Piece, historian Allen D. Roberts — who wrote the book Salamander: The Story of the Mormon Forgery Murders (1988) with former Deseret News reporter and historian Linda Buhler Sillitoe — describes essential aspects of the Hofmann story that were not included (or maybe landed on the cutting room floor) in Murder Among the Mormons.

Sillitoe’s and Roberts’ book Salamander was the first full length treatment on the subject and endures today as the most complete, balanced and accurate, among the half dozen books written to explain, or defend, or to serve as exposé regarding this most complex 20th century Utah story. If you want to purchase a copy or listen to a Kindle version, see the links below.

John Sillito — Linda Sillitoe’s husband (the different spelling is intentional) — recounts in the podcast how Linda, who is now deceased, saw her purpose as writing for “her tribe, her people,” who she believed needed to understand the whole complex, messy and uncomfortable story. She also felt that she and Roberts’ could “act as a translator” for those outside of their community, so they too could understand all the subtle aspects that someone outside might not understand or describe correctly.

Some thirty-three years later this is exactly what Salamander continues to offer. If you’re a lifelong Utahn, or live far beyond the Beehive State, reading Salamander will help you understand the man (Hofmann), his motives and the broader culture from which the story unfolds. Definitely see the documentary Murder Among the Mormons, then read or listen to this book!

Retired BYU film historian James V. D’Arc, gives the Netflix documentary a 5 out of 5 rating. D’Arc chalked-up what was missing to the limits of storytelling on film, and because the documentary was originally to be a much longer series.

I was impressed with the deep research, the use of historical materials (photographs, illustrations and extant film footage) and I even appreciated the reenactment segments, which for historians and material cultural specialists, tends to be the places where over dramatization or anachronist elements (people, objects and circumstances out of place or time) most often pop up. I am also not a fan of the interview backdrops or locations which were often hyper mysterious and over theatrical. Saying all of this, the documentary is riveting.

“According to criminal investigators here and court documents, the 32-year-old Mr. Hofmann fooled…scores of document collectors around the country and virtually all of the nation’s top forgery experts”

Revered and respected institutions — including the Library of Congress, National Archives, the Federal Bureau of Investigation and the Church of Jesus Christ of Latter-day Saints — fared no better. At the end of this episode, now some thirty-five years later, I asked Roberts what he thought were Hofmann’s motives, which were not entirely made clear in the documentary Murder Among the Mormons.

Bio of Allen D. Roberts: Born and mostly raised in Milwaukee, Wisconsin, Roberts is an architect and the former historical architect and architectural historian for the Utah State Historical Society. With Wally Cooper, he was co-founder of the architectural firm of CRSA. He is the author of twelve books and scores of articles on Utah history and architectural history. He was also a former co-editor and publisher of Sunstone Magazine and Dialogue: A Journal of Mormon Thought. It took Sillitoe and Roberts just over twenty-seven months to research and write Salamander.

Regarding the response of the Church of Jesus Christ of Latter-day Saints to the Mark Hofmann forgeries and murders, read: Richard E. Turley’s Victims: The LDS Church and the Mark Hofmann Case (University of Illinois Press: 1992).

Allen D. Roberts, The Juanita Brooks Lecture Series: “The Truth is the Most Important Thing,” Delivered at Dixie College, 12 May 1988.