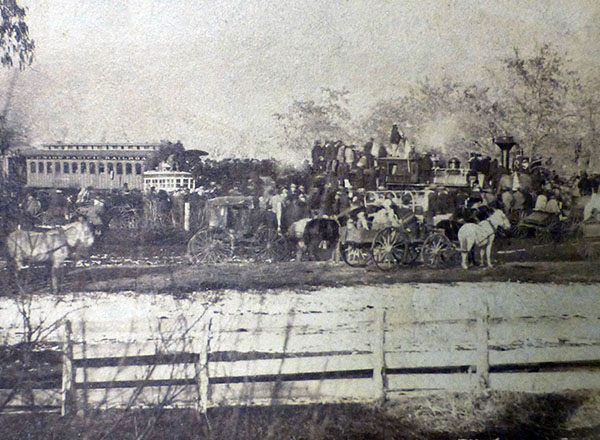 Utah was never entirely isolated from the United States, Latin America, and the Pacific World. From the 1800s onward, the Great Basin was a point of intersection where people from many cultures interacted with one another in several ways.

One of the most well-known events that drew people west of the 98th meridian was the California Gold Rush. In January 1848, James W. Marshall discovered gold in Sutter Creek while working as a laborer at John Sutter’s Sawmill located near Coloma, California. News about the discovery spread quickly and inspired gold seekers to rush westward.  Many of these overland travelers stopped in Salt Lake City to replenish their provisions. Others stopped in Salt Lake simply because they wanted to visit a settlement that looked roughly like their eastern hometowns before they continuing their travels westward. In all, the Salt Lake Valley became a popular stopover for the West’s overland travelers.

Utah territory consisted of rough terrain for people moving from East to West. It took a wagon train, hand cart or pedestrian travelers just under two months to reach Salt Lake City’s semi-desert location. Of course, the journey to SLC was not the driest, nor the hardest miles they would travel on their way to California. Just to the west of SLC lay the desert lands of the Great Basin (western Utah and Nevada), and then beyond this the Sierra Nevada Mountain Range, making SLC a prime location to water, feed and rest livestock, while also stocking-up on provisions before continuing their journey. Those who grazed their livestock in meadows along the Jordan River, often infuriated the Mormon settlers who claimed the grassy lowlands as their grazing lands. Salt Lake City offered travelers a variety of suppliers and a restful Euro-American experience, before they moved westward to the US territories of Oregon or California.

Gold seekers and immigrants were not the only people to visit Salt Lake City during the mid-1800s. Many famous Americans traveled to the Salt Lake Valley on stagecoaches, whose companies began offering direct travel to California in 1859. Some of the most notable visitors included Horace Greely, Sir Richard F. Burton, and Mark Twain. Twain wrote about his 1860s observations of the “Great Salt Lake City,” in his travel book Roughing It (1872).

Others stopped in Salt Lake simply because they wanted to visit a settlement that looked roughly like their eastern hometowns before they continuing their travels westward.

The railroad arrived in Utah twenty years after the California Gold Rush. On May 10, 1869, the United States celebrated the completion of the transcontinental railroad at Promontory Point, located just north of the Great Salt Lake. Seven months later the Mormon- built Utah Central Railroad connected Salt Lake City to the transcontinental road. The ceremony for Utah Central’s “last spike” and the Utah Central Depot shared the same location 400 West in between North and South Temple. The top photograph in this post is of the Mormon Church’s “last spike” ceremony. The site of the Utah Central Railway’s depot was intentionally constructed directly four blocks west of Temple Square, Brigham Young’s property and the church’s headquarters. The arrival of the Utah Central Railroad was just the beginning of Utah’s ever-expanding network of railroads. The railroads further opened the West to Euro-American settlement. In Utah, many immigrants from around the world traveled on trains to join the Mormon migration movement or to work in the city’s new and thriving industries.

Join us for our next installment of Salt Lake West Side Stories where we will discuss the rapid changes the railroad brought to the west side and to Salt Lake City.

Do you want to read the next post? UTAH’S EXPANDING RAILROADS AND SALT LAKE’S WEST SIDE

Related Activities: Visit Utah’s official state railroad museum the Ogden Union Station located at 2501 Wall Avenue on the west end of Ogden’s Historic 25th Street. You may also want to learn about the broader story about Utah, railroads, and the West by consulting the Utah History Day teacher’s packet Our Past, Their Present: Teaching Utah with Primary Sources, entitled “Engines of Change: Railroads in Utah.”

Contributors: A special thanks to historians Will Bagley and Cassandra Clark for assisting with the contents of this post.